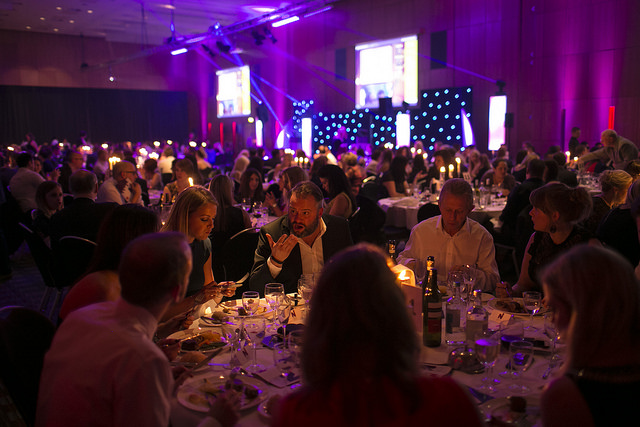 On Wednesday night, the North’s best & brightest marketing experts gathered to celebrate exceptional campaigns, organisations, institutions and agencies in the industry. The Northern Marketing Awards, which are organised by Prolific North and Don’t Panic took place at the iconic Hilton Deansgate and was a complete sell-out with over 400 guests attending on the night.

There were a total of 18 prestigious awards handed out to phenomenal Northern talent, and the competition proved to be incredibly tough, with some categories even requiring an extra highly commended award because the judges felt the quality of entries was so high.

Kicking off the awards, AO.com founder John Roberts shared his industry expertise with an inspiring speech and Andy Crane and Emma Jesson kept the audience well entertained throughout the evening.

It was a fantastic night for Leeds-based PR & social media agency Umpf who picked up three awards for Best Small Agency, Best Tourism & Leisure Campaign and Best Social Media Campaign with the judges stating that they were “deserving winners, showing impressive and consistent growth over 5 years. They have developed a great reputation and a strong working relationship with clients.”

PHD also had multiple wins for their innovative Commonwealth Games campaign with AG Barr; they were awarded Best B2C Campaign and Best Sport Campaign. Search agency Epiphany received the final award of the night for Best Large Agency; the judges were impressed that they had “clearly demonstrated their growth and dedication to their sector”. 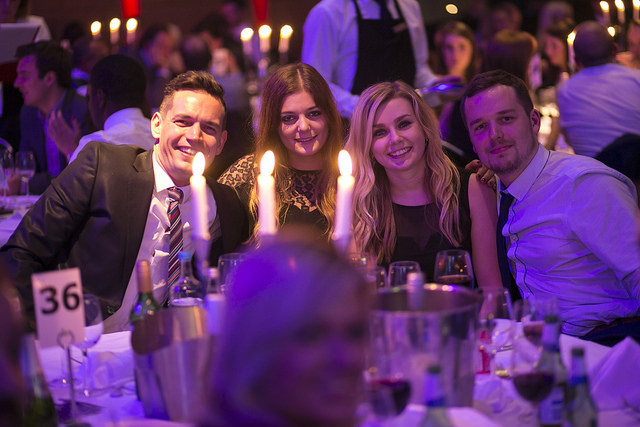 The judges said: “The judges were impressed at how this campaign produced such strong results in a notoriously difficult B2B market. The campaign penetrated the market to reach a core audience and the impressive results speak for themselves.”

The judges said: “This campaign showed an attention to detail through its creative focus and drive. It was an engaging campaign that communicated well with its target audience. Judges were impressed by the innovative use of media throughout the campaign.”

The judges said: “This campaign offered a focussed and professional approach to marketing in a very competitive environment.”

The judges said: “This extremely sensitive subject was handled with care and respect.  By shaping the issue of the Manchester Dogs Home Fire into a story, the campaign managed to focus on the positives and create a strong emotional connection with its recipients.”

The judges said: “We were extremely impressed by the impressive range of activity across so many different channels. It showed initiative in making great use of an existing asset. The campaign produced fantastic results due to fast thinking, spotting opportunities and making the most of them.”

The judges said: “We admired this campaign for its simple yet effective creative concept. It showed fantastic results using a multi-platform approach in a personal manner.”

The judges said: “This campaign showed how the team got to grips with what was needed for the client to be successful in its endeavour. It showed an awareness of the social climate and demonstrated how to penetrate the market.”

The judges said: “This was a very strong campaign, and made a potentially dry topic exciting and entertaining. It was commended for being creative, impactful and well executed on a low budget.”

The judges said: “This entry was so successful as it was a fully integrated campaign with clear objectives, and created something extremely memorable. It created a great sense of community and inclusion, with a great emotional feel to it right at the very core.”

The judges said: “This was an extremely brave campaign, doing something that stood out from the crowd. It was a very clever idea that was perfectly executed in the form of a stunt that drummed up lots of attention.“

The judges said: “This was a well-targeted campaign with excellent results. It had a wide CSR impact and demonstrated a dedication to community engagement and widening participation. An interactive, focused and engaging campaign, with a good sense of pride behind it.”

The judges said: “This campaign delivered a substantial amount for the budget they were working to. It was a well-integrated campaign, that was very economic and showed great creativity.”

The judges said: “This campaign was carefully thought out in terms of having a particular job to do, and doing it successfully with its use of creativity. The campaign was consistently high quality throughout, and had phenomenal results.”

The judges said: “This was a fantastic campaign. It showed innovation, attention to detail, and was, overall, a fun campaign.”

The judges said: “This was an extremely clever campaign, as it achieved its objectives and cost nothing. The content of the campaign was created in such a way that it can be continuously reused on a social platform.

The judges said: “This campaign was sophisticated and creative in its use of analytics. It was felt that the campaign genuinely used research, data and insight in a truly impressive way, and is a very worthy winner.”

The judges said: “This agency submitted a compelling and clear entry which conveyed how a small team had managed to face the odds and go through a complete rebrand, to go on to achieve great results. Despite facing a difficult task, the team pulled together and continued to create great work.”

The judges said: “This agency were deserving winners, as they have shown impressive and consistent growth over 5 years. They have developed a great reputation and a strong working relationship with clients. They show versatility and diversity in all of their campaigns.”

The judges said: “Epiphany were an extremely worthy winner, and commented on how the agency had a fresh feel to it. The judges were impressed by their demonstration of effectiveness over a range of services. Their entry was enhanced by the inclusion of client testimonials, showing a strong working relationship between agency and client. Epiphany have clearly demonstrated their growth and dedication to their sector, and should be proud of their achievements.”