Success for the The Textiles Tea Shop 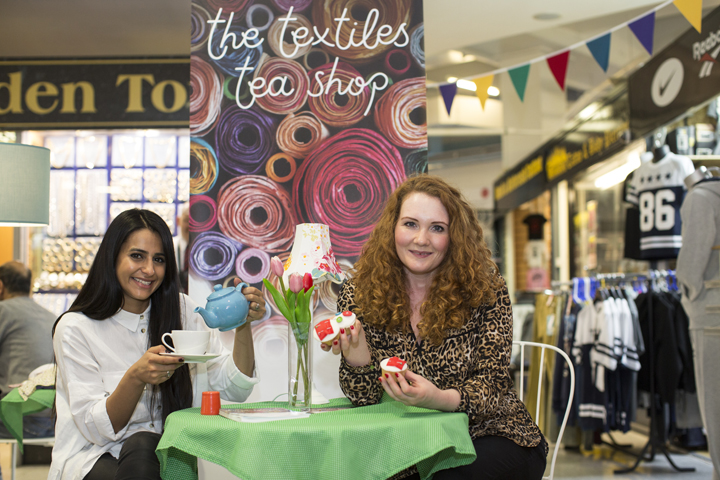 The first ever Textiles Tea Shop Roadshow took place at 6 different locations (Manchester, Tameside, Oldham, Bury, Bolton and Rochdale) across Greater Manchester throughout June and July. Supported by the European Social Fund and led by the Alliance Project based at New Economy, the aim of the pop up events was to bring attention to the resurgence of the Greater Manchester textiles industry.

The campaign was launched at the Manchester Arndale Market by brand ambassadors Coronation Street actresses and stars Jennie McAlpine and Sair Khan, who have both supported and been very vocal about the importance of the project.

The industry currently employs 11,300 people and generates £650 million for the local economy. Employers and learning providers estimate the creation of 400 new jobs each year over the next decade, amounting to 20,000 vacancies. The Textiles Tea shop invited anyone interested in joining the sector to pop in for a cup of tea, a cake and a chat about these new opportunities.

For those who once worked in the sector before much of the work and the garments and products themselves were sourced overseas, this seems to be something that is long overdue. With a huge consumer demand for quality goods that are sourced and made in the UK, there are a significant amount of jobs being created.

Also visiting were those interested in honing the skills they already possessed either from previously working in textiles or even practical sewing at home. The scheme also offered prospects for unemployed young people with a passion for textiles through varied apprenticeships so they could develop their skills whilst earning. These apprenticeships offer the ability of earning a wage at work whilst learning and developing the necessary abilities to forge a career in the textiles industry.

A wide variety of people attended the Textiles Tea Shop events, many with required skills that are high in demand, but were not aware that there were still career pathways available to them. These events definitely seem to have raised awareness of these new opportunities and the upcoming revival of the textiles industry in Manchester.

Celia Thornley of New Economy said: “The Textiles Tea Shop campaign was aimed at promoting research into the textiles sector in Greater Manchester- which it did successfully. After just one week of the last campaign date, twelve people had secured full time job roles in the sector and media interaction has hit the roof.”