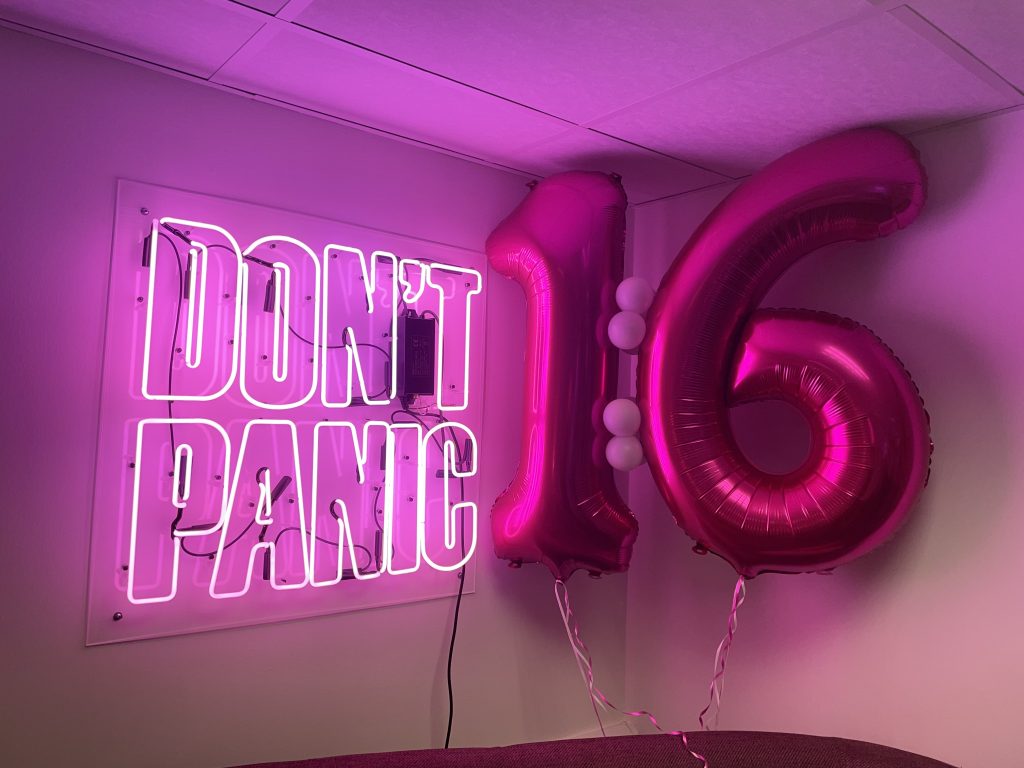 So this week feels like something of a milestone, Don’t Panic turns 16 years old.

I wanted to take a moment to reminisce a little about the baby I created 16 years ago.

We started, as with all babies, with a lot of nurture, long hours and interrupted sleep whilst we poured heart and soul into doing it right! As it grew we had tantrums, late nights, door slamming and drunken adventures (us not our baby!) At 16 we are heading into adulthood, fully formed, profitable and successful and continuing the late nights and adventures!

I started Don’t Panic back in 2005. I was a hugely reluctant entrepreneur, after leaving ‘Out There Events’ I literally couldn’t get a job in fact I was turned down by quite a few events agencies (I’m hoping they still regret that!) After six weeks of unemployment my husband Andy Wake suggested I should set up on my own Events company and after a little kicking and screaming by me (it runs in the family), we hotfooted it to PC world, bought a computer and installed me in our front bedroom. My baby needed a name and Andy often joked that left to my own devices it would have been called Nicky Wake Events, however after a lot of head scratching, a few bottles of red wine and a bit of brainstorming Andy picked up the book I was reading The Hitch Hikers Guide to the Galaxy, its cover was emblazoned with the words ‘Don’t Panic’ and the rest is history – big shout out to Douglas Adams.

Next step we needed to dress our precious baby! We visited Bury’s Printing.com and met Adam Hindle, who now runs Fluid Digital. Adam was to be a central part of the early days of Don’t Panic. Adam designed and printed our first iconic pink letterheads, business cards and eventually built our first awards websites and social media wall. Another thank you, that pink outfit still fits today! (If only that was true of all my award outfits!)

Now we were ready to get out into the big wide world. I did outreach before the term even existed! I wrote to literally everyone I’d ever worked with telling them I was setting up and to get in touch if I could help… we then waited patiently for the phone to ring and eventually it did! A few wrong numbers later, I got a call from Philip Young, a lecturer from Sunderland University who had spoken at a few conferences I’d organise. He’d had an idea for a conference about this thing called blogging and how it could perhaps revolutionise PR! Philip was way ahead of his time! After several calls we set about planning a one-day conference called ‘Blogging, RSS and the New PR’. Concurrently I had a call from another PR speaker, Andy Green, known for his inspirational training on creativity. Andy also had a conference idea; an event to explore how PR people could influence communications in the wake of the 7/7 London bombings. Don’t Panic was up on its feet and toddling with our first two events booked. Interesting both were organised on a no risk, no fee basis with Don’t Panic earning and retaining our fees – this was unusual in the events world but became the basis of our future business model. To this day we are an incredibly unique events agency who create, build and own our own events and assets.

The business went from strength to strength and in late 2007 Andy Wake left his well-paid communications job in Greater Manchester Police (gulp) to join Don’t Panic. He was responsible for all our early design, print and built our first ever website. A few years later we hired our first full time employee Rowan Jamieson (now Rowan Schahill) who was a hugely valued member of our team and instrumental in putting some order in my chaotic way of working. During this time we worked with some incredible clients creating brilliant events, they included JustGiving.com , Trimedia , NHS Blood & Transplant, University of Bolton, UCLan, SEMrush, Urban Splash, The Learning and Skills Council, PRMoment.com, Educate North, Royal Liverpool NHS, Tameside NHS, CityCo, Bruntwood, Manchester Digital, CIM, PRCA, CIPR and Click Consult to name just a few. A special shout out is due to Nick Jaspan and Profilic North (previously known as How-Do) who were an instrumental client in our continued growth and I remain hugely proud of some of the joint ventures and collaborations we created – along with a good few hangovers…

Around this time, 2009, we decided to launch Some Comms an awards celebrating the very best in social media. The awards were a great success and much loved by the PR industry. Today they are known as the UK Social Media Awards which better reflects what they are – Andy Wake was way too clever with his branding at times!

In 2010 we were lucky enough to be asked to organise SAScon, a one day conference which was the brainchild of Simon Wharton, Richard Gregory, Pete Young, Ben McKay, Peter Cobley and Richard Hudson. They wanted to create a conference for Manchester’s search community, and over way too many beers, on regular occasions (my favourite ever event planning sessions!) SAScon was born. During this conference we were totally blown away by the impact SEO was having on businesses bottom line and the difference a page one listing can make to profitability is mind blowing. After more beers and after parties we suddenly realised there wasn’t an Awards for the SEO & PPC industry, so we decided to launch the Search Awards. We were lucky enough to secure our headline sponsor Gareth Hoyle, a great supporter of ours over the years, which helped underwrite the risk to Don’t Panic. ‘Entrepreneur’ was beginning to suit me!

The first Search Awards was awesome! We had over 150 entries, 200 plus attendees and a very very messy night, the search crowd loved, and still do, an opportunity to dress up and party. They started calling in the UK Search Awards so we quickly bought that domain! While at that night myself and Andy had the idea of an EU Search Awards in Amsterdam and the rest is history! We now run search awards in APAC, MENA, USA, Europe, UK, Global in New York and are planning launches for Africa and Asia. We’ve also been proud to work with Olga and the team at SEMRush on their Nordic Search awards and Australia Search Awards which led to delivering an event at Sydney Opera House, a particularly proud moment! Thanks also to Dixon Jones, a legend in the search industry who has been a long time supporter and champion of ours and introduced us to Brett Tabke, founder of Pubcon and host to the US Search Awards in Vegas.

Sadly in 2017 Andy fell ill, he had a heart attack which resulted in a catastrophic brain injury and we sadly finally lost him to Covid in 2020. We raise a glass to you Andy and salute all that you did for Don’t Panic.

Fast forward to 2020 and a global pandemic – who saw that coming?! Well apart from Bill Gates! The covid pandemic could literally have decimated the events industry. Thankfully the incredible Don’t Panic team lead by our now MD Helen, Michelle our FD, Sarah Power our Ops Manager and Chloe our Creative Director were hugely agile and quickly pivoted our business model to virtual events. Their quick and creative thinking has ensured our survival and profitability and we even managed to add a few awards to our portfolio! We are now back to a full staff complement of 20, we now own and deliver 35 prestigious awards events around the globe and are looking forward to an office move next week.

We are also FINALLY back to running live events and its never felt better, we literally cannot wait for September and the UK Agency Awards – that is going to be one hell of a party!

Over the years we’ve employed some amazing people, seen a few staff weddings and several Don’t Panic babies born and we are still growing up ourselves.

My news, after 16 years I’ve decided the time is right to take a slight step away from day to day management and I’ve promoted Helen Kirkland to MD. Helen is a brilliant and a perfect fit for the role.  I’m confident the business is in very good hands. I’ll still be around causing chaos and dreaming up new awards ideas, networking (basically lunching with our clients, sponsors, judges and supporters!) as well as attending the majority of our awards – well who doesn’t like a party!

I will close by saying the biggest of thankyous to everyone who has been part of this 16 year journey including obviously Andy Wake, Finn my gorgeous son who lets Mummy go on various work trips to Vegas (its hard work honest!) my Dad John Pennington and his wife Mary who have provided countless hours of support, Dog Dog sitting and childcare, my amazing Senior Team, Helen, Sarah, Michelle and Chloe, our non-exec director Richard Gregory, all our incredible sponsors and our fabulous judges without who we wouldn’t have our awards, our loyal customers, the digital industry as a whole who have taken us in the hearts and given us so much support, all our staff past and present, our incredible presenters and speakers, our AV, trophy and print suppliers. Special thanks also to Steve Kunciewicz our trusted lawyer and supporter, Dave Edmunson Bird our chair of academic standards and Judith Lewis, probably our most longstanding judge (and chief wine taster!)

I hope to see you all soon at one or many of our Awards at the end of the year. Good Luck with your entries!